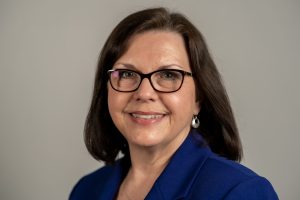 As President and CEO of Koinonia, Diane Beastrom has led the organization to become one of the region’s leading service provider for adults with intellectual and developmental disabilities. For 35 years, she has overseen the expansion of the organization’s services and resources, including managing mergers with two other intellectual and developmental disabilities service providers and launching adult and school-based employment services. Diane also led the development of Koinonia’s first Intermediate Care Facilities (ICF’s), supported living programs, and day and vocational services.

Under Diane’s leadership, Koinonia has grown into a $30 million enterprise with 20 licensed residential homes, over 50 supported living sites, day support, and vocational and career services, expanding into Summit, Medina, Lake, Geauga, and Lorain counties. A values-driven and goals-oriented executive, Diane leads Koinonia with a demonstrated commitment to people, development, innovation, and collaboration.

In 2018, Diane was named as one of the Notable Women in Healthcare by Crain’s Cleveland Business. Again in 2021, she was recognized as a Woman of Note by Crain’s Cleveland Business, recognizing outstanding women whose achievements, commitment, and work enrich Northeast Ohio.  She is a Board Member for the Ohio Provider Resource Association (OPRA), as well as Vice President and President-Elect of the American Network of Community Options and Resources (ANCOR). She serves on several committees for both the state and national trade associations. Diane holds a bachelor’s degree in Speech Pathology and Psychology, and a master’s degree in Speech Pathology from Cleveland State University. She also holds a Certificate in Nonprofit Management from Case Western Reserve University.